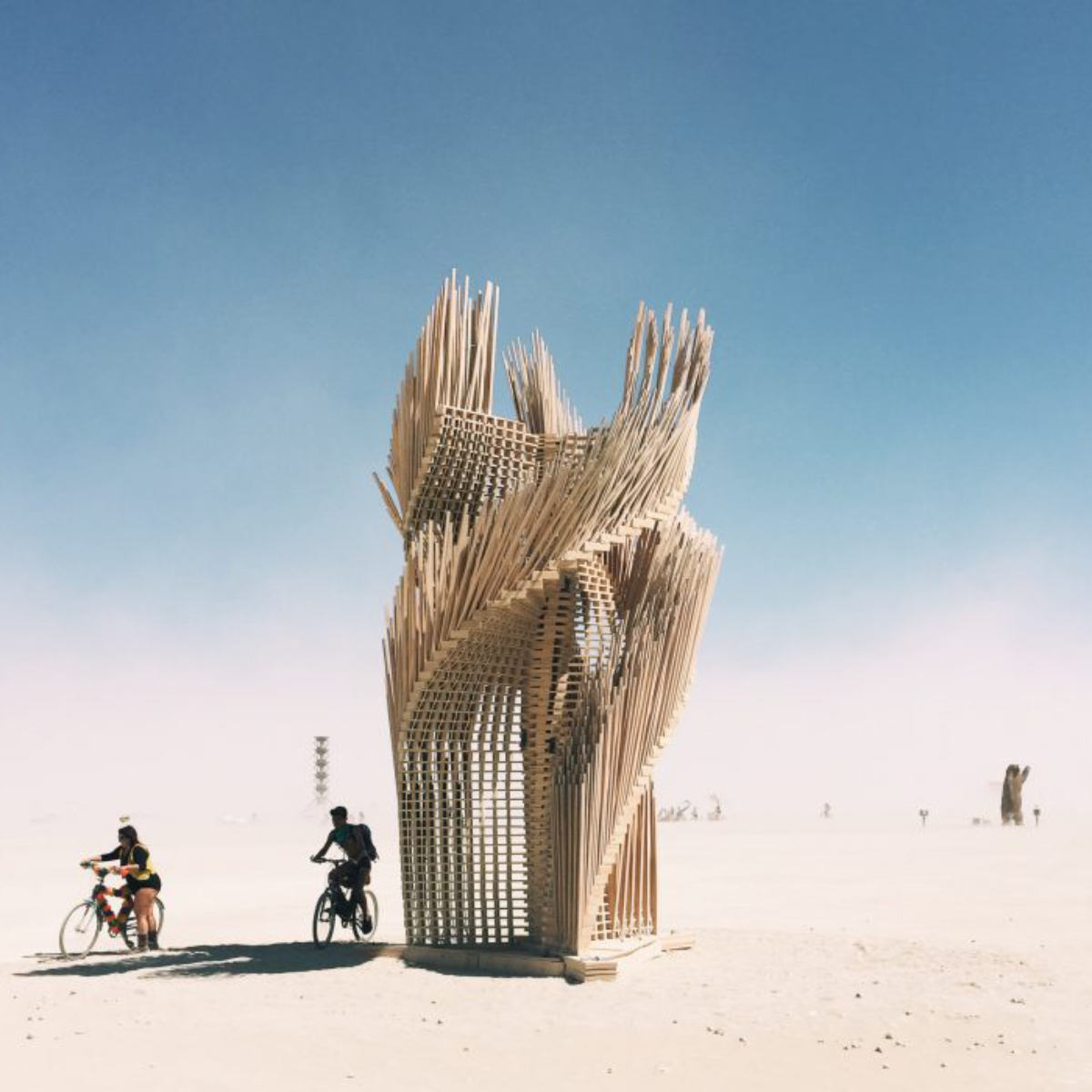 A simple curve, the brush of the artist, the beginning of many dreams, our tangential dreams. This piece seeks to express the myriad of interpretations that we make of art and celebrates the dreams they engender. Tangential Dreams is a climbable sinuous tower made from off-the-shelf timber and digitally designed via algorithmic rules, maximizing inexpensive materials. Around 1,000 “tangent” thin wooden pieces are held in position via horizontal pieces rotating along a central axis, gently moving in the wind like leaves of a giant tree.  Each tangent was stenciled with inspiring sentence from people around the world, collected through our crowdfunding campaign, and hand written by burners throughout the festival

Tangential Dreams is the result of four years of research building projects at the Burning Man festival with our WeWantToLearn.net  architecture student group (with co-tutor Toby Burgess and structural engineers Format). Last year we built The Infinity Tree, The Bismuth Bivouac and Reflection and in 2013 we built Shipwreck and Fractal Cult. We have learned so much and are so grateful for this architectural journey which led to the project below.

Tangential Dreams is dedicated to all the dreamers around the world.

“Don’t be afraid to make mistakes. Be you.” Anonymous words written on our structure.

Lists of all tangents:

“If you think you understand Burning Man, you weren’t paying attention”. “Every written words if a victory against death” Michel Butor. “Kisses are free”. “Give = Get”. “Inner Peace becoming outer piece”. “Done is better than perfect”. “The Devil and God both play the same tricks on us, one to harm, the other to teach.”. “Those who dream by day are cognisant of many things which escape those who dream only by night.” “Although the complexity of life is the true source of my awakened happiness, in my dreams there is only you”. “Face your consciousness, your fears, your prejudice, never hide from your higher self.” “Qui n’avance pas, recule”.

Tangential dream is a climbable sinuous tower made from off-the-shelf timber and digitally designed via algorithmic rules. One thousand “tangent” and light wooden pieces, stenciled with inspiring sentences, are strongly held in position by a helicoid sub-structure rotating along a central spine which also forms a safe staircase to climb on. Each one of the poetic branches faces a different angle, based on the tangent vectors of a sweeping sine curve.

In line with this year’s theme, the piece is reminiscent of Leonardo’s Vitruvian man’s movement, helicoid inventions such as the “aerial screw” helicopter and Chambord castle helicoid staircase as well as his deep, systematic, understanding of the rules behind form to create art. From a wave to a flame all the way to a giant desert cactus, the complex simplicity of the art piece will trigger many interpretations, many dreams. The piece attempts to maximize an inexpensive material by using the output of an algorithm – (the value of the piece being the mathematics behind it, as well as the experience, not the materials being used). The computer outputs information to locate the column, sub-structure and tangents.

We believe digital tools in design are giving rise to a new Renaissance, in which highly sophisticated designs, mimicking natural processes by integrating structural and environmental feedback, can be achieved at a very low cost. We worked very closely with our structural engineer format, sharing our algorithms, to give structural integrity to the piece and resist the strong climbing and wind loads. There are now three “legs” to our proposal, each rotated from each other at 60 degrees angles around a central solid spine, to ensure the stability of the piece, similarly to a tripod.

The tangents are not just a decoration, they act as a spiky balustrade to prevent people from falling. The central column is made of clusters of 2*4 timber, tapered at a 30 degree angle to form triangular pieces, overlapping and rotating by a fixed increment, holding the helicoid pieces together around a strong central axis, fixed with  deep structural wood screws. The helicoid members, made of 2*8 timber, will be held on one side by the column and on the other side by another standard riser piece, also fixed with structural wood screws.

The sub-frame will then be used to locate and fix the tangent pieces, made from a thinner and lighter piece of plywood and screwed with washers to the edges of the two closest sub-frame pieces.  The whole 6m high sub-structure will be pre-assembled at the Generator in Reno. The first three legs will be grounded with 4 ground anchors each after having placed the decomposed granite. Once the sub-structure is up, the branches will be screwed in place on playa using a scaffolding placed below the spiral. The order of the branch will matter as some of them will be unscrewed and sent to the crowd-funders whilst some of them will be burnt at the end together with the substructure

Burners around the playa will want to climb the structure all the way to the top and dance against the sweeping curves of the art piece. We are hoping to elevate the audience in every possible way, through movement, light and poetry. Together with our engineers, we have made it safe yet challenging to climb the piece with a central helicoid staircase around the central column of the structure.

The tangent pieces will serve as security balustrade and will be lit from the sub-structure with powerful LED connected via the central spine, yet they will fragile enough to break and not hurt if someone were to fall on them. The audience will be able to read the poetry and philosophy delicately stenciled on each tangents coming from the Burners’ community itself via our crowdfunding campaign.

We expect inspiring conversation taking place on the structure from burners wanting to explain their sentences or a collage of sentences which created a serendipitous “cadavre exquis” of thoughts. This piece will be made from the Burner’s thoughts and dreams. As they did on our previous pieces, they will write on the tangents, attempting to reply and enrich the thoughts before we send them back to their authors.
At the end of the festival, instead of burning the whole structure, we will send back the tangential pieces to each author or person of their choice. At night, the light display will transform the piece into a burning flame or a giant imaginary desert plant. We designed the piece so that the cabling of the adhesive LED strips will branch out in parallel from the central column to the three main “wings” of the structure meaning that only three cables will come out of the central column and plugged to the boxed generator couple meters off the piece itself.