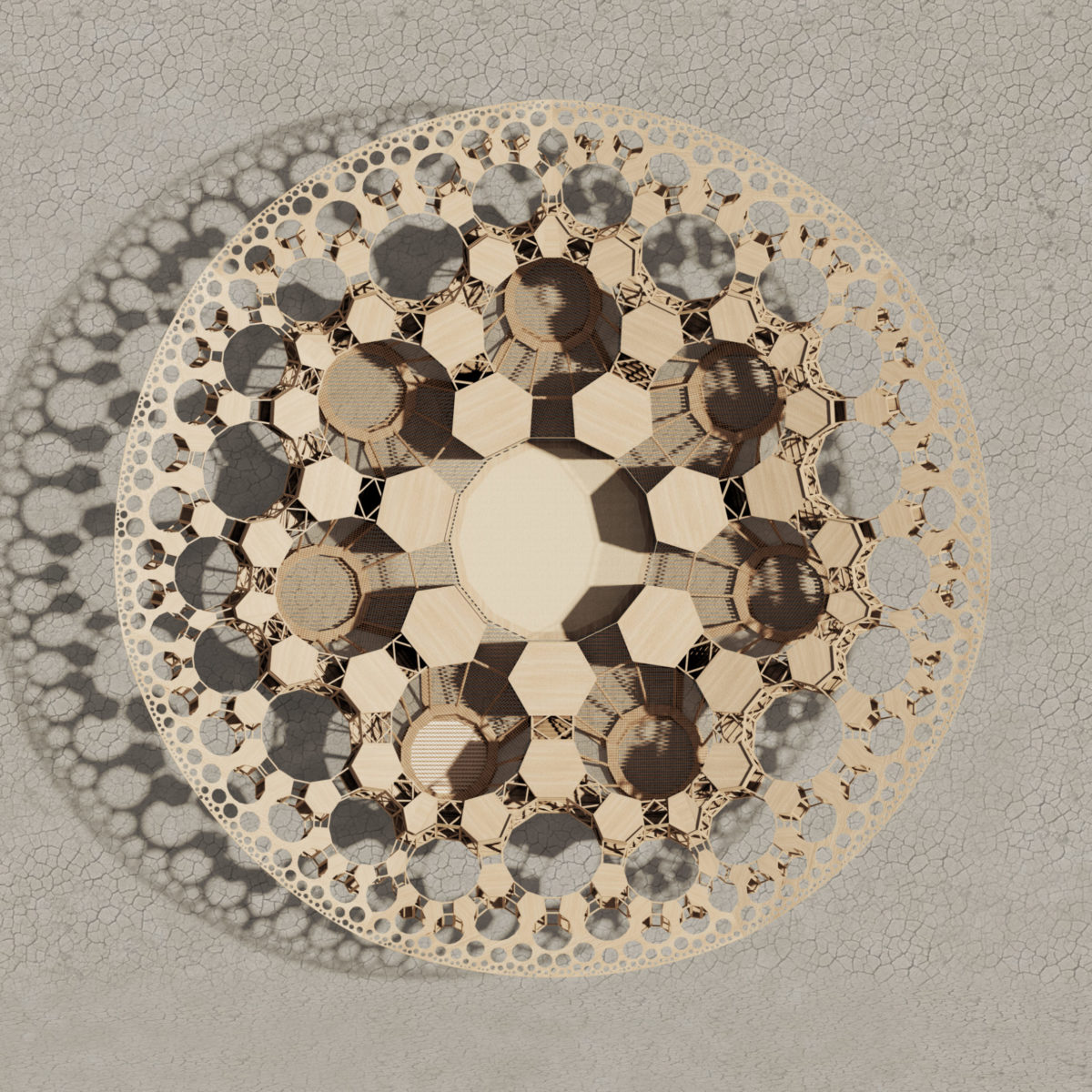 
Catharsis is a fractal gallery for our infinite dreams.

It welcomes all arts and performances in the spirit of radical inclusion and self-expression, acting both as amphitheater on playa and a travelling museum for burners around the world. After the event, it will be re-assembled in other cities.

This infinite space, has seven gateways elevating to the sky and getting increasingly intricate and intimate, forming a dream-like set of galleries and performing spaces for everyone to use and place art of all kind.

Catharsis is made of a total of 60 timber modules assembled through metal hinges developed with our engineers. It has a 7-fold rotational symmetry which will help with repetition in the process of fabrication and assembly. The spaces are connected with nets for people to rest and interact above the structure itself. It also has benches for burners to park their bikes prior to experiencing the space.

Catharsis is a fractal amphitheater offering endless possibilities to place and perform art, an open lattice encouraging interaction and placement of gifts for communities in and out playa.

Instead of fire, we will work with Drone Stories to create a digital flames and reveal catharsis’ fractal geometry in the sky.

Catharsis cannot be owned or quantified. It will re-define itself constantly throughout the event with burners placing art in the form of gifts, inspired by eachother. Catharsis comes from the greek, in which tragedy’s pain would be processed by the public, an artistic form of purification. In psychoanalysis, it makes the sub-conscious conscious and turns our dream into a reality we can understand. Processing emotions and getting them out, an artistic process with a collective dimension.

Catharsis will act as portal to our dreams. As a fractal maze-like geometry at the cross section of mathematics and nature, the experience through it will never be the same twice. It will feel like a dream within a dream within a dream: A rabbit hole in which burners will get lost, whilst finding themselves again! Maybe we need dreams to understand our reality?

It currently only exists in the Metaverse of BRCvr, with thousand of avatars experiencing it throughout the covid crisis next to Galaxia. It is the Yin to the Temple’s Yang. Instead of a build piece becoming virtual, this will be a virtual piece becoming real.

Burners will have an uncanny feeling of reality after flying through it digitally. We believe the piece must be freed from the metaverse and needs a physical equivalent to be whole. The process of mindfulness is making our dreams conscious!

By re-assembling the project elsewhere, our aim is to create a bridge between BRC and the communities that cannot access it.

‘Burning Man has forced me and our students to think with time and buildability in mind. The biggest challenge for Catharsis was to build a safe structure that could be assembled and disassembled several times. I love this idea: allowing buildings to have several lives, assembled when needed and stored when not, in the spirit of the circular economy.’

Instead of burning this project as with Galaxia, our aim was to reassemble the project in the courtyard of London’s Somerset House to establish a dialogue between cities, and for the wider community to respond to these messages. We now hope that by creating a virtual event, we can allow anyone around the world to visit the space online. In this surreal parallel universe, the catharsis is now in all of us! Dreams to be continued…

If you would like to be involved in getting Catharsis off the ground, please get in touch with how you might be able to help. You can donate to our fundraising page using the button below. Any help is much appreciated, make sure to include your details so we can thank you and keep you up-to-date with our project’s progress.